Architecture of the VII Day

3779, ca 50%. These numbers describe a social phenomenon that occurred in the architecture of the post-war Poland without which it is impossible to comprehend the culture of this country. 3779 – this is how many churches were built in Poland during the communist period,…

3779, ca 50%. These numbers describe a social phenomenon that occurred in the architecture of the post-war Poland without which it is impossible to comprehend the culture of this country. 3779 – this is how many churches were built in Poland during the communist period, a number unmatched by any other European country. How was this possible within the orbit of the USSR? It is remarkable when considering that – especially under Khrushchev – fighting religion was official government policy. Who built these churches? Who gave them permission? And how was this church-building boom connected with a major crowdsourcing trend which was up and running in Poland well before it was popular? All these questions are tackled in a fascinating book Architecture of the VII Day, published in Polish in 2016.

And now to that second number of importance, about 50% of all of the buildings that appeared in communist Poland were built by the private sector. Such statistics are both exceptional and hard to fathom. After all, it was always presented that, during communism, only large state construction enterprises were able to build on massive scales…but appearances can be deceiving. In reality, it was the surprisingly abundant private construction sector which propelled the urban sprawl. Many people built houses on their own with the help of relatives and neighbours. This practice was particularly popular in the countryside where communal co-operation was cheaper and easier in general. Furthermore, the need for such entrepreneurship was extensive as the 1950s in Poland was a period of vast reconstruction, following the destruction of the war. Hundreds of thousands of young people migrated from rural to urban areas to find better education and living conditions. More often than not, their first stop was construction sites where they toiled at rebuilding the devastated cities or building anew in the middle of nowhere, such as the district of Nowa Huta in Cracow – the architectural epitome of socialist realism. Far and wide, the country was brimming with domestic migrants practicing their trade––they knew how to build and, despite firmly believing in the slogans of the new regime, they had been raised traditional Catholics. For them, the split between the church and the communist ideology was incomprehensible. 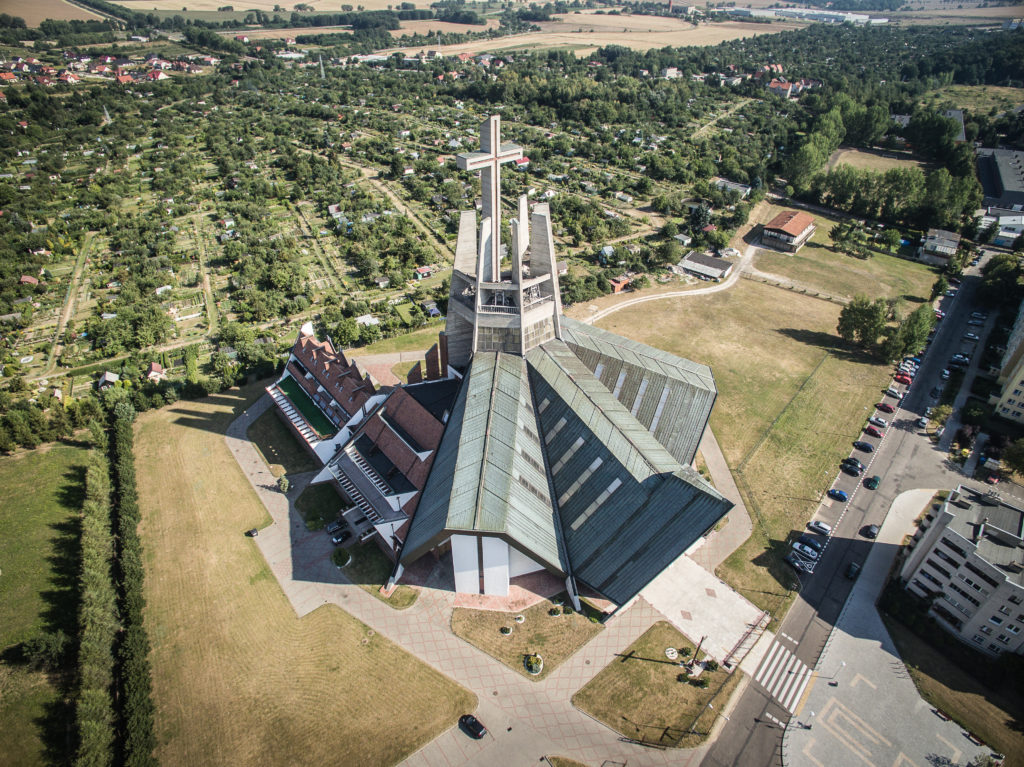 The Polish authorities were quick to realise that they could not out influence the Catholic Church, the latter holding a particularly strong position in Poland. The Poles moving into brand new socialist realist blocks of flats refused to forgo Sunday mass. The periods when the communist party fought the clergy, particularly after 1956, were followed by a brief thaw as communists turned a blind eye to the activity of the Catholic Church. Essentially, they had no choice after Karola Wojtyła was elected pope in 1978. And thus, Poland was governed by the dichotomy of two independent orders––secular, when Labour Day was massively celebrated on the 1st of May; and religious, when throngs of people turned up to church every Sunday, including communist party members secretly baptising their children. This state of limbo could not but be conducive to a nationwide grassroots church-building boom. Churches were erected as joint efforts from thousands of people working together, every resident contributing to the best of their ability. Even though today most of the churches are architecturally unappealing, the story behind their origin is all the more fascinating. And, looking at the contemporary Poland, it seems that church-building – along with the Solidarity movement – was the last common effort to have united the Poles.

The Architecture of the VII Day served as a basis for one of the ArchDaily’s top ten most popular articles last year, and the authors are currently working on the English version of the book.

This article was published in Magazyn Miasta / Cities Magazine # 1/17  – our special international issue released as a part of Shared Cities: Creative Momentum (SCCM) project. You can read more about the project here. You can download PDF version of the issue for free here.